Long weekends are the best, especially when they involve lounging around the house in pajamas, eating whatever your heart desires, and mountain biking. Sound familiar? I typically jump at any chance to go on a quick trip up to “the city” but decided to go against the grain and stay home. Boy am I glad we did! Not only did I get some much-needed rest, we also went out biking not once but twice! (Insert applause here) I was so stoked enjoying the good (read: dry) weather and doing something physical. So much so that I don’t even mind that I had to spend all evening Monday icing my Achilles’ tendon or tending to a new bruise on my thigh. I love a sport that hurts me so.

The good news is that I am more comfortable on my bike now than a month ago. I take bigger risks, ride further, and feel stronger overall. Sure, I’m limping around like a big baby after the rides, but that’s mostly due to making noob mistakes. Sigh. At least I’m making progress. Also, the boyfriend and I stop and practice log overs (not sure this is the name?). It mostly consists of him going casually over a huge stack of logs and me backing out at the last-minute because I’m terrified. True story. Sad, I know, but sometimes I can’t help it!

We tried to take pics while riding but it’s hard to capture decent photos of us biking using our iPhones, so I don’t have anything worthy of being posted. Plus, someone has the annoying habit of cutting of a certain boyfriend’s head. Ahem. I’m so focused on watching him do a trick, or see how he jumps that I forget I should be focusing on the picture. Sorry! I will try again this weekend. Fingers crossed, it doesn’t rain!

Until next time, thanks for reading! 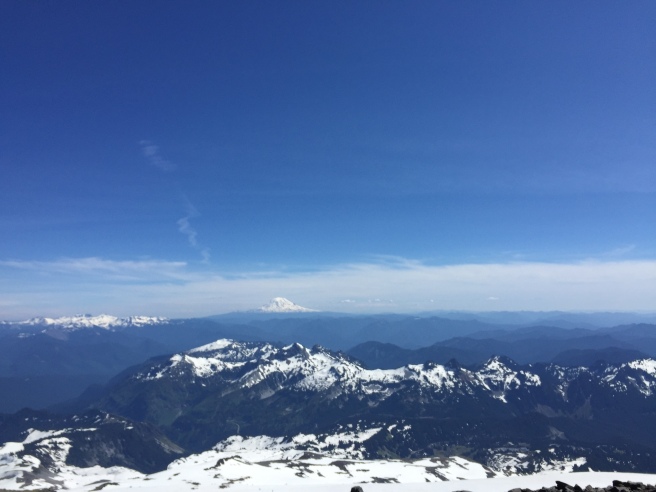 This is overdue, I apologize for the delay. May and June have been busy months for me and after each trip was another activity so it seems everything has collided. Below is my summary from an amazing hike while in the Pacific Northwest. Enjoy!

We started around noon, which was the latest I’ve ever started any hike. This was due to the fact that we left Seattle at 8:00 AM for Mt. Rainier and though only 60 miles or so away, it’s not a fast road and going up the mountain was painfully slow. Anyway, I was comfortable in my nike running tights, worn and used hiking boots, racerback tank, and a sweatshirt. My waterproof shell was packed in the fiance’s backpack. My upf 50 hat is always on my head when hiking to protect me from the sun. We also applied ample sunblock to any exposed skin—I didn’t plan on shedding any of my clothes regardless of the heat. (I have an amazing Columbia long sleeve upf 50 shirt that I always hike, bike, run in but stupidly left at home. Whoops.)

The hike started off with a pretty inclined paved road. The scenery was gorgeous, and the day was clear and warm (around 70 F/20 C). I noticed pretty quickly that my breath was rapid early on. I evened out my pace and continued forward. We climbed, and climbed and climbed. In between the climbing were several water breaks. I started drinking water with the very first step, as I didn’t want to add any stress to my body by being dehydrated.

We passed alpine marmots, eyeing us suspiciously. The views were some of the best I’ve seen, like ever. I never wanted to leave and it helped that it was so beautiful because the hike started to show signs of slowing me down. 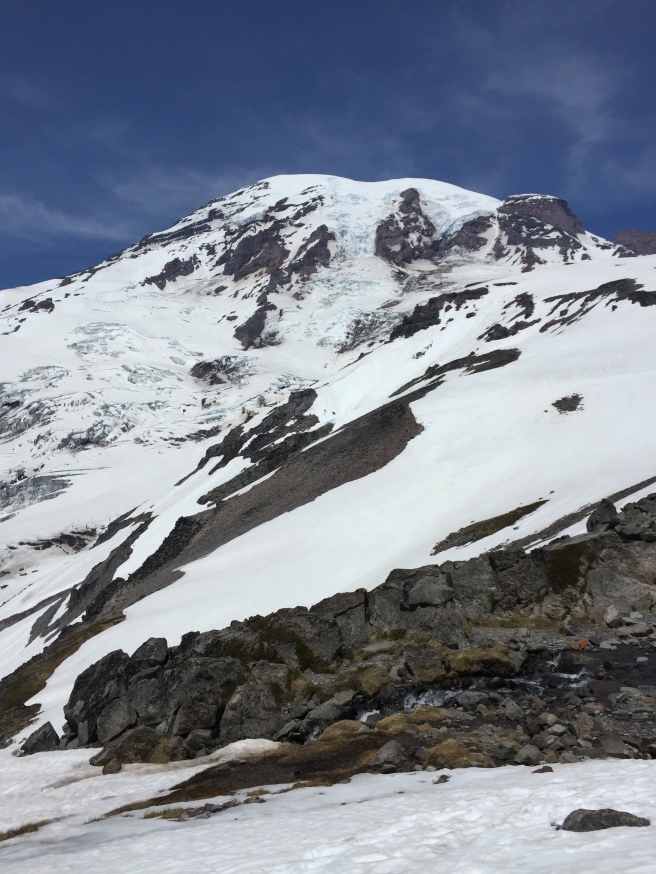 Even though we were nearing June we expected and trampled through tons of snow on this hike. Once we near the camp the climbing steepened on the snow fields and I quickly wished I owned waterproof pants or gaiters. We saw loads of people hiking with a snowboard or skis and some even passed us as the gracefully boarded down the mountain. It looked like such fun! About thirty minutes from Camp Muir I started feeling pretty sick. My head was starting to hurt despite having a filling breakfast and energy bar only a few minutes earlier. I knew I was drinking enough water because I had to pee constantly.

I told myself I could do this, and attempted in vain to hype myself as best I could. Before long I realized I just didn’t have it in me—even though quitting is something I just don’t do. I was devastated. As each step became harder I knew I had a decision to make. I made a plan to make it at least to a set of rocks not too far up a hill  we were battling. My fiancé  decided to push on and I would wait on the rocks. I watched him climb much faster as I fell into the background. I envied him at that moment. Why couldn’t I climb like that? I tried one last time to motivate myself and push forward faster, my body said hell no. After numerous breaks and some prayer I made it to the sanctuary of the rocks.

Once seated comfortably it dawned on me that my feet were finally showing signs of defeat as well. They were wet and numb and my fingers achingly cold. Besides being exhausted I felt dizzy and as though I might vomit. Not a fun feeling but I was so thankful to be on solid ground—even rocky ground—I didn’t care too much about my physical state. I settled into the rocks and after drinking some water decided to have lunch. After my sandwich was devoured I started taking pictures and thinking of the rest of the hike. I stared at the top of the mountain which wasn’t that much higher than me. I felt accomplished rather than defeated. So what I didn’t make it to Camp Muir, I made it pretty close (I later found out from the fiancé ). Why couldn’t I be happy that I made it so far on my own? As I reflected on the art of being thankful for the little things, I was suddenly in a state of euphoria.  It was divine.

Fifteen minutes later I saw a figure that looked like my guy and was pretty excited. The break did me good and ultimately I’m glad I listened to my body and stopped when I did. We began our descent down to the hotel and slid (quite literally). I couldn’t believe how fast it was going down. I slid down one huge steep hill and it was so much fun. Then I slid down others not so  intentionally but it was still fun. On the way down we saw quite a few alpine marmots and a black fox! The fox was most surprising as they’re usually pretty elusive. He or she was sleeping among the trees curled up, and I think we woke it. The sleepy amber eyes stared at me uninterested.

If you happen to plan a trip to Mt. Rainier let me offer you some advice. Wear suitable clothing! There is a ton of snow and even if it’s not cold starting out unless you have waterproof shoes and gaiters your feet will be absolutely soaked. This wasn’t a deal breaker for us, but it could make the hike miserable for you. You don’t want that. Also, if I ever did this again, I’d bring a sled on my back—a small one. It’s much faster going down. Lastly, pack more energy bars, sandwiches, etc than you think you need. Because you’re climbing the entire way to the camp it’s absolutely exhausting—and calorie zapping! The way down is easier but still tiring. You will want something to replace the energy.

This is such a long post so if you made it to the end kudos to you and thank you for reading! All in all I think it was a success. If you’re interested in our stay (Paradise Inn) just let me know and I’ll post about that–otherwise it’s not that interesting. Stay active my friends!

I’m writing today’s post from the comfort of a friend’s car. Our convoy of cars, trucks, and SUV with bike racks are headed north to Pittsburgh. This weekend we are going to ride a portion of the Great Allegheny Passage, starting from Pittsburgh, PA and ending in Cumberland, MD. The total distance will be around 150 miles and unfortunately it isn’t all flat! But hey, let’s live a little.

I started mountain biking around the same time I met my fiancé, in 2010. It’s a challenging yet rewarding activity I really love. Since moving to Maryland a few years back I haven’t been on a bike much, but that’s all changing since I purchased a new bike a few weeks ago. We took it out on some trails and had a blast. It is clear I will need some work before I feel completely comfortable and I’m also looking into taking a skills course to speed that process up. I need all the help I can get! If you’re interested in mountain biking only I have a blog dedicated to that. I’ll add that link below.

Road biking (this particular ride will be road and trail) isn’t something I’m all that familiar with, but that’s not to say I don’t like it. When the opportunity presented itself and we were invited I signed up immediately. This weekend will be the farthest I’ve ever rode-should I finish! I’m both enthralled and nervous. What if I get sick? What if I’m just too weak? What if I hate it!? I can’t help thinking like this, I’m hard wired.

I’ll be posting pics as I can! Have a great weekend!